We’ve selected what we feel are the key examples of Contemporary Mexican Homes. We aim to include Mexican residential architecture projects that are either of top quality or interesting, or ideally both. 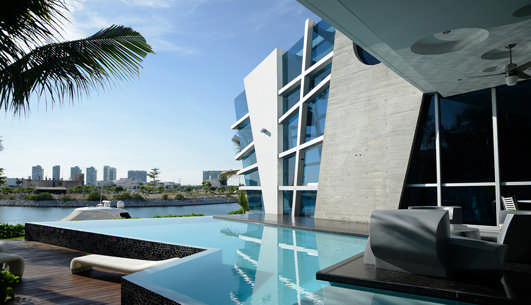 photo from architect
Casa Gomez
The project “Casa Gòmez” was developed and built by SOSTUDIO between 2011 and 2012 in the residential area at the Puerto Cancun development. By an approach to the deconstructive architecture, the design is organized by combining interior and exterior areas as a single space through big hidable windows, thus favouring the main views to the canal and the hotel zone of Cancun. photo : Ivan Esqueda
House eR2
The project emerged with the idea of taking advantage of the views from the residence to the eucalyptus forest that is located adjacent to the plot. photo : Héctor Armanado Herrera / PCW
Casa CorMAnca
On a 12 meters by 13 meters (39ft by 42ft) plot of land, a monolithic volume is transformed in order to attain luminous indoor spaces. Slade stone at the exterior facades is contrasted with the soft beech wood finish, achieving great definition and special discovery. image : Redo Arquitectura
EVRC House
The project is solved in a basic shape: a cube of three levels that sits with a half-buried level in the land, in which some orthogonal “parts” were removed to configure the interior space, getting very interesting floated prisms.

photo : Rolando Córdoba
Contemporary Mexican Residence
The residence “Entre Arboles” (amongst trees) is the result of a deep analysis of the site. The lot is in a golf course, it is a regular rectangle of 20 by 80 meters and has 52 trees in it all of different sizes and heights.

image : Redo Arquitectura
Mexican Housing Complex
It is located in the residential area of the highest appreciation in San Luis Potosi City and a great position, having the convenience of being situated between different communication highways, important shopping centers and an unparalleled view of La Loma sports club. photo : Jorge Silva
House in San Luis Potosi – added 19 Feb 2013
The architects chose a conventional scheme, an L-shaped plan slightly enlarged to the centre, where the volumes of the house are simple, strong and predominantly blind outwards, opposed to the “baroque” and uninteresting aesthetics that predominates in the condo. photo : Jorge Silva
House in Zapopan – added 18 Feb 2013
The client requested a residence in a private section of Zapopan for a family of four members. After the analysis of the program made, and as the family has teenager children, we conclude that the house had to have various levels of simultaneous interaction.

photo : Eddy Yuvoniel
House in Aguascalientes – 1 Feb 2013
The client made the request to the architect of “drawing the house in a way the house was warm, functional and one level only for the floor. It should had responded to a limited budget, a difficult context and a minimal terrain”. it was constructed within 73 m2. photograph : Yoshihiro Koitani
Valle de Bravo house – 18 Dec 2012
Contemporary Mexican house design located at Valle de Bravo lake. The building is located on a steep slope bordered by both a stream and by the lake itself. The plot is hemmed in by thick forest. photo : Jaime Navarro
Casa La Peña – 28 May 2012
Sited in Valle de Bravo on a property of 1117 square meters, this house is a project at the bottom of the cliff that highlights and frames the beautiful great lake views from within. Due to the irregular ground where it is located, it has been solved in three levels to also blend into the landscape. photograph : Hector Armando Herrera
Casa Lomas Altas – 18 Feb
The house was built in the early 80’s and is located west of Mexico City. The remodeling made by Claudia Lopez Duplan was a total renovation of both space and image. In addition to interior and exterior renovation, major changes were also made in all the facilities, especially for the unification of the public areas.

photo : Paul Rivera, ArchPhoto
Contemporary Mexican House
This house is an exploration on the trace of a variety of formal and architectural lineages in the ongoing transformation of the modern dwelling that ranges from Neutra´s Kaufmann House to the Case Study Housing Program.

picture from architects
New Mexican House
The architectonic concept for this residential project is to propose a composition that is achieved by the proper manipulation of “contrasts in balance”; an architecture that is generated as a response to the particularities of the site, the adequate solution for the family programmatic needs, but most important, inspired by the profound motivation for the search of the supreme wellbeing of its inhabitants.