Wolf D. Prix, an Architect from the Future, in Bucharest:
“Don’t worry, in two days tomorrow will be yesterday”

Wolf D. Prix is co-founder and CEO of the Viennese architectural firm COOP HIMMELB(L)AU in Vienna. Professor Prix has signed the projects of many famous buildings, highly awarded in international architecture competitions. Among the best known works that bear the COOP HIMMELB(L)AU hallmarks are the BMW World in Munich, the Dalian International Conference Center in China, the Busan Cinema Center in South Korea, the European Central Bank in Frankfurt, the Martin Luther Church in Hainburg and the UFA Cinema Center in Dresden.

Wolf D. Prix’s work was published in a considerable number of books and his designs are exhibited in museums and collections from around the world. In December 2012, Architekturforum Aedes in Berlin inaugurated the exhibition “Wolf D. Prix & Partner: 7 + Projects, Models, Plans, Sketches, Statements”, exclusively dedicated to COOP HIMMELB(L)AU projects.

For the first time in Romania, as the special guest of the third edition of INGLASS International Architecture Conference, Wolf D. Prix will speak about his latest projects and the future of architecture. The title of his presentation: “Don’t worry, in two days tomorrow will be yesterday”.

INGLASS is part of the series of international events initiated in 2010 by ABplus Events and the Order of Architects of Romania, with the aim of promoting excellence in architecture. 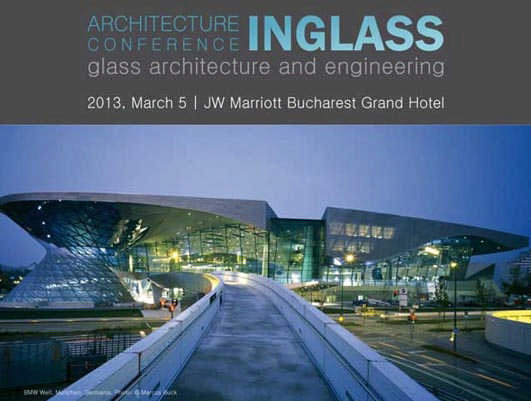 For Participantion Packages, Info and Registration please contact us at [email protected]

image from ROCAD
Romanian Convention of Architecture and Design