As the capital of Liangshan Yi Autonomous Prefecture, in the southwest of Sichuan Province, China, Xichang is known as the “City of Daylight” and also a famous aerospace base. The IDM project is located in Qionghai Lake International Tourism Resort, which is endowed with unique natural conditions. As a typical residence of a martial general, it used to be the private residence of Liu Xiangzhi, a martial general of the Qing Dynasty. Built in the middle of the Qing Dynasty, it is of a wooden column-tie structure, with a three-entry and two-courtyard layout. IDM conducted the architectural and interior design, transforming the historic building into a resort hotel. The ancient mansion is divided into two parts, namely, the main building which looks axisymmetric, and the attached buildings which present a free layout. IDM has preserved the soul of the historic mansion and restored the structure according to its original appearance during the renovation, so as to reserve the vestiges of the long history, including exposed grass-mud walls, peeling walls, rotted wooden carvings, armors of the Qing Dynasty, and paintings of the Republic of China. Deeming the ancient mansion as the lobby, the designer removed the useless partitions, restored the original window sashes, exposed the roof truss, and replaced some tiles with glass tiles, so that the pleasant sunshine of Xichang falls in the space here. There was a stable in the attached buildings. IDM changed it into a teahouse. Through a window, guests take Qionghai Lake and the mountains outside in a glance.

In view of the limited construction area and height of the ancient buildings, the designer set up sinking spaces indoor to increase the levels and expanded the space. Light-colored materials and simple furniture, together with ancient articles and old decorations which were preserved in situ with their original appearance, are rich in historical charm.

In the process of “reviving” and “awakening” this quiet and elegant interior space, the designer included many local rare cultural heritage remains into valuable and rare display art, balancing the time and space relationship between the history and contemporary era. The mansion itself may also be seen as an exhibit after IDM adopted lighting design to illuminate the architectural outline. The combination of natural light and artificial light makes the space more three-dimensional. The corridor becomes a bridge between the new and old buildings here. The sunlight is filtered into patches by the grating on the top in the daytime; the luminous columns face the moon at night. In the contrast between the virtual and the real, people feel the whisper of the wind and step into a space far away from the bustling world.

The Chinese restaurant on the first floor is equipped with soft sofas connected to the outside. With the window opened, people can enjoy delicious food in the nature at any time in Xichang where it is 17 ℃ all year round. In the private room of the Chinese restaurant, guests may watch the old mansion. The stone wall imitates the texture of rammed earth to echo that of the old mansion and match Xichang’s clean sunshine with the transition of volcanic rocks and wood.

In the private room of the western restaurant, green stone was only adopted to distinguish from other spaces, while simplified classic furniture of the Ming and Qing Dynasties to improve the modern sense and integrate into the overall narrative of the hotel. “Through vision and touch, we can feel the track of life and experience the texture of history from the new and the old, and also the rough and the fine. We hope that both old and new buildings can endure the challenge of time and keep their original feeling and connotation forever.” said the designer.

The reception hall is located at the junction of the old and new buildings. The designer hoped that it remains neutral and compatible with the past and the present. The appearance of those hanging flowers came from simplified and abstracted interior ceilings, a Chinese traditional architectural form. The suites were arranged along the best landscape surface of the ancient mansion. There is a courtyard inside the suites to lead hot spring into the courtyard. In the suites, local red sandstone was used as the table top, and weaved bamboo and ethnic paintings as the wall decorations. 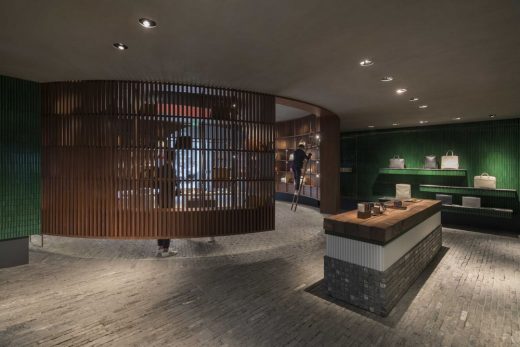 Tianfu One Exhibition Gallery in Chengdu

Chengdu, China is the capital of southwestern China’s Sichuan province.