We have 4 pages of Berlin Architecture selections.

photo from architect
PLATOON KUNSTHALLE is designed as an experimental space for artists and creatives, and for the members of the PLATOON NETWORK. The KUNSTHALLE hosts art projects, workshops, and events. It also presents a multitude of creative and artistic projects that clash with the regular art-institutions.

photograph : Hans-Georg Esch
At just under 119 m, the Zoofenster is one of Berlin’s tallest buildings. And yet it is in no way a typical high-rise block. Instead, it is a complex, tiered structure that responds to its urban environment in a number of ways. It consists of a 22-storey block and 32-storey tower that rise above a lower block that occupies the entire plot and reflects the height and lines of the neighbouring six-storey buildings.

image : Jigen
New Central Library Berlin – 8 Apr 2013
This is a building proposal for the Berlin Central Library. Strategically sited within the city adjacent to the new Tempelhoff Park. The new building should be viewed as a point of departure and is directly associated to the city’s commitment to future urban development within this area. 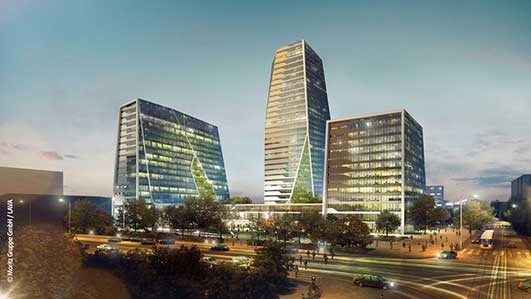 image from architects
The Square 3 Buildings – 28 Feb 2013
Three towers of gold, silver, and bronze and three diagonally shaped city blocks make up THE:SQUARE³, a new mixed use development inspired by sport that revitalises a unique urban quarter in Berlin. The project is just nine minutes from Alexanderplatz, the very heart of the city, and located near Europe’s largest urban nature reserve and a sports hot spot.

picture from LAVA
Gartenstraße Berlin Mitte – 22 Nov 2012
An old cabaret theatre from the roaring ’20s has been uncovered in the heart of Berlin. The semi-derelict music hall theatre, built in 1905 on Gartenstraße in Berlin Mitte, has been buried in 30 tonnes of rubble since 1934 when it closed, perhaps as part of a crackdown on the cabaret scene by the Nazi regime.
Surrounded by apartment buildings and only a few metres from the well-known city baths in trendy Mitte, the music hall theatre was found by accident by Dirk Moritz, founder of the Moritz Gruppe, Berlin. He stumbled upon the abandoned threestorey building located behind a courtyard in the former communist east of the city.

picture © Werner Huthmacher
Haus Potsdam-Mittelmark – 19 Oct 2012
The site lies upon a hill in a beautiful small village in the district Potsdam-Mittelmark in a fantastic scenic situation with breathtaking views over the nearby lake. The surroundings are dominated by a combination of historical and modern mansions. As many of the old large trees on the site should be kept as possible.

picture : Jan Bitter
Truman Plaza – 10 Sep 2012
The Truman Plaza consists of offices, retail, health and sports facilities, which together form an urban setting around a central plaza within a leafy borough on the edge of Berlin. Located in Berlin Zehlendorf, the building parallels the adjacent Clayallee and is part of a larger master plan that balances its historical urban context with its integration of a delicate onsite forest.

photo : Hagemeister
H10 Berlin Hotel – 4 Sep 2012
This four-star hotel building on Joachimstaler Straße off the famous Kurfürstendamm, is a successful example of the integration of modern craftsmanship reconciled with a historical architectural ensemble. An eight-story cube was added to the listed school building from 1889 by architect Jan Kleihues.

image from architects
bambooline berlin – 14 Jun 2012
The bambooline berlin explores the cities urban development and proposes a new approach for the temporary, interim use of sustainable urban wasteland. A new, imaginary band complements the historically developed lines of the Berlin cityscape: the Berlin bambooline.

picture from architect
Oil Silo Home Berlin
The design proposal is a 100% self-supporting housing solution for the post-oil world. It’s highly structurally stable, waterproof, efficient to assemble and disassemble, and has the capacity for prefabrication and mass production.

photo : Nelson Garrido
Humboldt Box
This 27m high building seems very choking when integrated in the landscape, but it is only temporary, it will be dismantled when, in 8 years from now, its mission has been completed and when the Humboldt Forum is constructed. Holding exhibitions and events this building has also a store on the ground floor and a restaurant on the top.