We’ve selected what we feel are the key examples of Taiwanese Architecture. We cover completed buildings, new building designs and design competitions across Taiwan. The focus is on contemporary Taiwanese buildings.

An earthquake has toppled buildings in the south Taiwanese city of Tainan, killing at least seven people, reports the BBC.

Rescue teams have been trying to reach people trapped in rubble since the magnitude 6.4 quake struck.

We have 3 pages of Taiwanese Architecture selections. photograph : Jeffrey Cheng
The ground floor is purposefully raised to redefine the urban public-private edge, and at the same time to visually connect the garden of the lower unit with the parks. The upper unit’s public areas are arranged on the fourth floor which enjoys a splendid 6 meter floor-height that invites the surrounding beautiful mountainous scenery into the building. photo : SAM
The hotel is located at Kenting in the southernmost part of Taiwan. The property was previously used as a retreat by the late Generalissimo Chiang Kai-Shek in the late 60’s, thus no major structural or exterior openings were allowed to be changed. With the rich history of the property, the client hoped to achieve two purposes: heritage and sustainability. image from architect
For Taiwan’s third largest city, Taichung, the Austrian architectural office submitted together with the Taiwanese partner keyStone architect this spectacular design proposal for a new City Cultural Center in an international competition. The projected building takes up characteristics of the surrounding landscape to define different usage areas.

image from architect
Taichung City Cultural Center Design – 21 Jun 2013
This architecture competition proposal uses a unitary transparent skin that allows stolen glimpses of the complexity that lies inside. Thus this object becomes a contemporary interpretation of an ancient traditional art and culture. Comprised of thin lines of recycled ceramic elements, the skin gently filters the light that reaches the interior and enhances the shapes of the volume. The skin of the design not only serves to enhance the aesthetic value of the building, but it also reduces the impact on the natural environment by taking advantage of passive technologies such as solar shading and natural day lighting.

image from architect
Wooden Wave Cultural Center – 20 Jun 2013
The architects state: “We believe change or new is not a sole creation from nothing but rather evolution from the past. Designing the cultural center was a task to reveal what could be the image of modern and contemporary Taiwan Architecture. Cultural center is a good place to express the identity of the Taiwan”.

render courtesy of RUR Architecture, PC
Taipei Pop Music Center Building – 18 Jun 2013
Reiser + Umemoto, RUR Architecture PC, is proud to announce that the groundbreaking of the Taipei Pop Music Center will take place Wednesday, June 19, 2013 at the center’s new site on the edge of Taipei, Taiwan. Envisioned as a coherent environment that challenges the limitations of traditional performances spaces, the innovative new center will consist of several mixed-use spaces woven together into a dynamic, multi-purpose venue that reflects and supports the evolving culture of pop. 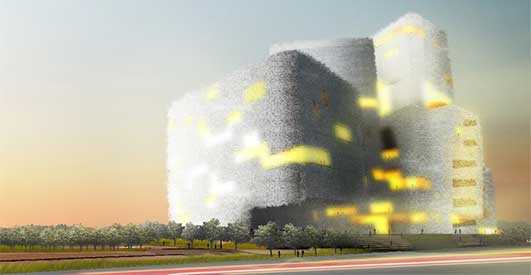 image from architect
City Cultural Center Taiwan – 5 Jun 2013
Changbin Township’s Baxian Caves was our source of inspiration, for the creation of an ecosystem, a dynamic relationship among the environment, topography, structural intensities, and human activities. We use the reference of the Baxian Caves to inspire our inhabitant physically and mentally within an organic and nature-type of landscape. 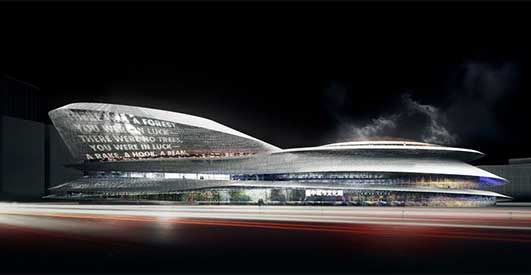 Courtesy of Mecanoo architecten
Dutch architecture practice Mecanoo has been shortlisted to design the New Harbor Service Building in the major Taiwanese port city of Keelung. The building will accommodate the office of Keelung Port Authority, a passenger cruise terminal and cargo terminal, a bus transfer station and commercial space. With the new maritime landmark for second largest seaport in Taiwan, the Port of Keelung Taiwan International Ports Corporation, aims to create a new ‘Gateway to the Nation’. In the coming months the five shortlisted teams will work on finalizing the design. The winner will be announced on September 15, 2012.

photograph from architects
National Library of Public Information Taiwan – 5 Mar 2012
Situated in the middle of the island of Taiwan, the National Library of Public Information occupies a site that is both geographically and metaphorically the confluence of information exploration and urban evolution. The striking form of the building features a “horizontal flow” theme recalling the early irrigation canals in the city’s settlement since the 18th century, as well as symbolizing the fluid data interface in the internet age.

image from architect
Taipei Performing Arts Centre – 16 Feb 2012
The design of the TPAC building – a 1,500-seat theatre and two 800-seat theatres – is the result of investigation into the internal workings of theatre. Plugged into a central cube clad in corrugated glass, each theatre shares backstage space and mechanical facilities. Two of the three theatres can be combined into a ‘Super Theatre’.

rendering courtesy of Santiago Calatrava, LLC
Yuan Ze University Buildings – 12 Feb 2012
The project will consist of a Performing Arts Center, a new Art and Design school and the Y.Z. Hsu Memorial Hall, which is dedicated to the university’s founder, Mr. Yu-Ziang Hsu. The Performing Arts Center will house a 1,200 seat concert hall and a 500 seat theater that can be used for both traditional and experimental performances.

photo : AdDa
CICADA – Urban Acupuncture – 20 Jan
The Cicada is an open form based organic space inside the mechanical reality of Taipei City. The simple bamboo structure reaches a 12 meter span with 8 meter height and is 34 meters long in total. The construction method is local knowledge from South China and Taiwan. By time the structure will be covered with vines, which seem to explode from the ground. The urbanized river basin of Taipei is extremely fertile.