We’ve selected what we feel are the key examples of contemporary Russian Architecture. We aim to include high quality Russian buildings.

We cover completed buildings, new building designs, architectural exhibitions and building competitions across Russia. The focus is on contemporary Russian buildings but information on traditional buildings in Russia is also welcome.

We have 3 pages of Russian Architecture selections with links to many individual project pages. photo : Ilya Ivanov
Ferrum 1 St Petersburg Offices
The first building in Russia constructed with Corten steel. This office building stands on the historic site of the former Rossiya factory in St Petersburg’s Polustrovo district. Situated on the right bank of the Neva opposite the Smolny Cathedral.

The first video tour in English about monuments of Constructivism in Yekaterinburg, Russia. (Duration: 7:45 minutes.)
“Today, Constructivism – the Constructivist style in architecture – is a brand of Russia. Yekaterinburg (Sverdlovsk in the Soviet era) is one of the world’s largest exhibits of Constructivism. We want people all over the globe to know more about the architectural heritage of the 20th century.
This short film was created with the help of crowdfunding (84 donors.) The video in Russian is published on the internet and more than 30,000 viewers have seen it. Media reach through TV channels is more than 1,5 million people all across the Urals.
Company ULC-Russia, the initiator of the project in English, group PODELNIKI, and the internet video channel Roomple are planning to make five more episodes in English about 15 Constructivist monuments of Yekaterinburg.” 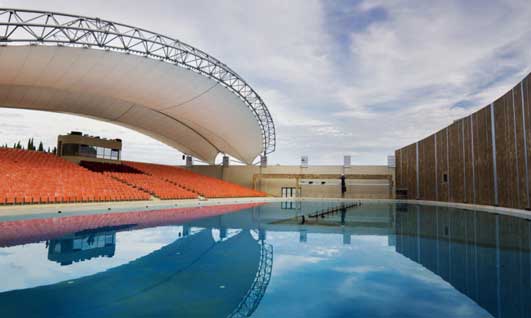 photo by SC Olympstroy, all rights reserved
Ice Cube Curling Centre Sochi
The construction of winter sports facilities is always a significant challenge for building engineers as there are so many intricacies to consider, such as the need for multilevel ventilation. Much depends on how well services such as mechanical ventilation and air conditioning are performing, in terms of both the comfort and well-being of athletes and fans – and the condition of the ice and of the building itself.

image from architect studio
Secret Gardens Belgorod
The urban plan for the “Quiet Downtown” Belgorod puts together the best ingredients of the living atmospheres of world class cities to create a new mix unique to Belgorod: Green alleyways and brick buildings of New York and Amsterdam, monumental ensembles with intimate courtyards and green gardens of Paris and Vienna, and premium class housing with key-controlled gardens of London and Zurich. 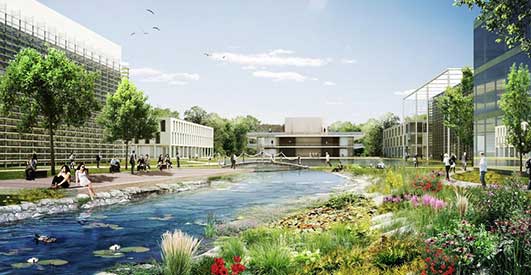 image from architect firm
Eco-Polis
A new highway on the north side of Odintsovo and a new railway station for a high speed rail line, which eventually will link an innovation center ´Skolkovo´ with the proposed international financial centre in Rublevo-Archangelskoe, will additionally strengthened Odintsovo as a desirable location for living, working and education.

image © yoo
LeontievskyMys St Petersburg
The debut residential project for yoo, the internationally renowned property design firm is launched in St. Petersburg, under the yoo Inspired by Starck brand. The new 399 unit residential complex is set on Petrogradskaya with sweeping views across the Gulf of Finland. LeontievskyMys is apparently the “first design-led, international-standard luxury housing in St Petersburg”.

image from Zaryadye Park Competition
Zaryadye Park Moscow
Zaryadye is a unique historic district in downtown Moscow, on the bank of Moskva river, adjacent to the UNESCO World Heritage sites at Kremlin and the Red Square. After the demolition of Hotel Russia, the site has remained abandoned for over 6 years. Vladimir Putin proposes to turn this 130 000 sqm area into a multi-functional public park.

image from architect
Moscow Polytechnic Museum and Educational Centre
Massimiliano and Doriana Fuksas + Speech have won the prestigious international competition for the design of the “Moscow Polytechnic Museum and Educational Centre” in Moscow which should be realized by 2017. After the historic season of Italian architects, centuries later, an Italian architect returns to realize an important public work in Moscow.

image from organisers
Belgorod City Centre Architecture Competition
Open international competition for the design of an urban block in the centre of the city of Belgorod, Russia image from architect
Kuntsevo Plaza Development Russia
This building development – a vibrant new live, work, shopping and entertainment village occupying a full city block – aims to deliver a modern “community gathering place”. The pedestrian-oriented center is made up of “geometric buildings” and topped with terraces and undulating glass features.

image from architect
Mariinsky Theatre Russia
Major new Russian building due to open in May 2013, designed by Canadian architects