Nacogdoches, Texas – August 16, 2022 – Global design firm Populous celebrated the completion of the first season of use at the Loddie Naymola Basketball Performance Center (LNBPC) at Stephen F. Austin State University in Nacogdoches, Texas. The firm carried out the design of the building’s interior and exterior, as well as the development of branding and graphics for the 54,000-square-foot, two-story project, which opened in October 2021.

The LNBPC, built on the front lawn of the existing William R. Johnson Coliseum on the corner of East College Street and North University Drive, displays a forward-looking face for the university’s athletics department and serves as a new gateway for the university’s secondary entrance on that side of campus. The LNBPC connects via a new underground tunnel to the arena, where the men and women’s home basketball games are played. The 7,203-seat arena was built in 1974, and, until this past season, housed the player locker rooms and coaches offices. In addition to the new facility, Populous’ scope encompassed improvements to the arena including an underground tunnel connecting the arena to the new practice facility as well as new loge boxes within the seating bowl. “The Basketball Performance Center is one of the largest investments in the history of Stephen F. Austin State University’s athletics programs,” said Jonathan Kelley, a principal and senior architect at Populous who oversaw the project team. “Following several successful basketball seasons for the men and women’s teams, we worked with the university to build the future of its program, student-athletes and fans, creating a one-of-a-kind facility that is one of the best in college basketball.” “The Loddie Naymola Basketball Performance Center has been transformational, not just for our basketball programs, but our entire athletics department. The building has been a point of pride for all of us at SFA,” said Ryan Ivey, Director of Athletics at Stephen F. Austin State. “It has created a phenomenal home for our storied basketball programs, and set the tone for future athletics facility projects.

“It was a pleasure to work with the staff at Populous to make this building a reality. From the beginning it was important for us to create a building that paid homage to who we are (Lumberjacks/Ladyjacks), where we are (Piney Wood of East Texas), and where we want to go (to be the leading mid-major athletics department in the nation). This building was able to hit on all three!” added Ivey. The first, underground level of the LNBPC features a full-sized practice court and two shootaround courts (which can be utilized for the university’s summer camps), a film room, player lounges and locker rooms for both teams, and an athletic training room with hydrotherapy and nutrition offerings. The tunnel connecting the LNBPC to the William R. Johnson Coliseum is also on the first level, allowing the men’s and women’s teams to use their locker rooms for both practice and gameday. The second level includes the entry lobby, coaches offices, conference rooms, weight room, and balcony where coaches, donors, and visitors can observe the practices on the courts below.

The addition of the LNBPC introduced considerable scheduling flexibility for the men and women’s basketball teams, as both teams can now use a variety of courts and practice courts during the season. In addition to the basketball programs, teams across Stephen F. Austin benefit from the facility with added weight room and athletic training spaces. Previously, all student-athletes at Stephen F. Austin previously shared one weight room. Now, with two fully-equipped weight rooms available, other ‘court sports’ such as volleyball and tennis can also utilize the weight room at LNBPC, freeing up time and space in the existing weight room on campus. Populous incorporated feedback from the basketball teams in its design through two distinct charettes, or workshops, one for the men’s team side and one for the women’s. Led by Populous interior designer Andrea Bays, these sessions included sourcing feedback from student-athletes through creative writing and brainstorming exercises. As a result, the facility is a seamless, cohesive space with beautiful architectural and branding elements, colors and materials specific to each team.

In addition, as Populous worked with Stephen F. Austin to develop the design vision, all aspects of the facility, from the exterior and building structure to the interior design and branding, were cohesive from the beginning. Each aspect of the facility was developed with the goal of designing for the student-athletes and the university’s history, and a consistent, authentic materiality allowed for a smooth design process and vision that reflected the success of both teams, a high level of functionality, and the genuine sense of place in East Texas.

For the overall interior design of LNBPC, Populous drew inspiration from the team’s mascot, the Lumberjacks, and the forests of East Texas, using a variety of wood and textures, blackened metal, gray tones and concrete, with cognac leather accents. Populous Senior Designer Geoff Kornegay noted, “With SFA located deep in the ‘Piney Woods’ of East Texas, we seized the opportunity to bring the wood theme into the facility every chance we could.”

Immediately upon entry of LNBPC’s lobby, visitors’ eyes are drawn to a display of burnt wood rings on the ceiling. These rings were taken from a 120-foot pine tree that had to be removed during construction. With the help of the university’s forestry department, it was preserved in a nearby pond and cut into rings by a local artist, who then constructed an art piece that stretches the ceiling in the lobby over the stairs. Cognac leather benches sit atop concrete floors, where players and visitors can take a pause before taking the stairs down to the player lounges, locker rooms and practice courts.

Bespoke touches can be seen in each space of the facility continuing into the locker room, an energizing environment that serves to prepare student-athletes to take the court. Populous worked with a local Dallas company, Hollman Lockers, to arrange perforations in each locker in the formation of distinct East Texas pine trees. A black and white carpet features a diamond pattern that is mirrored on the ceiling, a play on a basketball net. A new underground tunnel just outside the locker rooms connects the LNBPC to the William R. Johnson Coliseum. It features a dark floor and large repeated graphic of cut logs on the wall, topped off with a neon-powered saw blade to build the anticipation of taking the court on gameday.

On the other side of the locker rooms, the practice court itself is designed to highlight its surroundings. Upon entering the court, the eye is drawn to the large glulam beams supporting the roof, spanning almost 100 feet long and six feet deep. The double-height practice court allows for a full wall of glazing, bringing natural light into the space. The coaches’ offices look directly out over the court and through the windows to the famous pine trees and East Texas forest, creating a hidden moment of peace for players and staff. On the exterior, the wall of windows is clad in wood fins, serving to moderate the light and beckon to the facility’s environment. A new public plaza that sits adjacent to the LNBPC and leads up to the refreshed entrance of William R. Johnson Coliseum has quickly become one of the most picturesque places on campus. This plaza features turf, seating, and other landscaping elements, and has become a popular backdrop for photos and celebratory moments, as well as a place to congregate before and after games. The wood motif has been carried out into the plaza, where the concrete walkways and ramps were texture-stamped to reflect wood prints.

In William R. Johnson Coliseum, the construction of the underground tunnel connecting LNPBC to the arena required a corner of the seating bowl to be demolished. Populous worked with the university to design a modern concession stand and loge box premium seating area, a first for the arena and a move that has enhanced the fan experience. Populous is a global design firm that designs the places where people love to be together, like Yankee Stadium, the London Olympics, and Climate Pledge Arena. Over the last 40 years, the firm has designed more than 3,000 projects worth $40 billion across emerging and established markets. 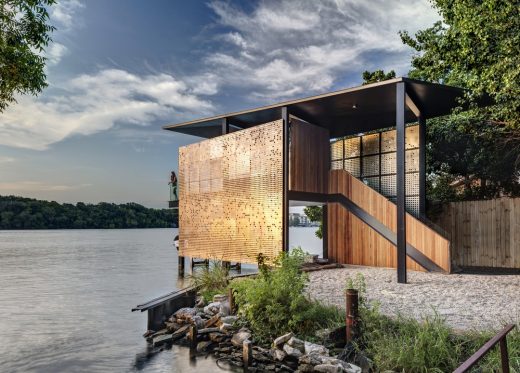