This project has now started on site with demolition underway. This is the first super-tall tower in Nomad, a 1,001-foot-tall luxury residential building.

Developer Boris Kuzinez’s Five Points Development has been assembling a development parcel on New York City’s Fifth Avenue, in the Nomad neighborhood near Madison Square Park, for some time. The skyscraper is designed by Meganom, the Moscow-based avant-garde architecture firm led by Yury Grigoyan and co-founder Ilya Kuleshov, with Elena Uglovskaya and Artem Staborovsky.m The building will be this architecture firm’s first project in the U.S.

The form of the skyscraper is shaped by a unique structural system that separates the building’s functioning core (elevators, mechanical systems, etc.) from its living spaces. This creates expansive, unobstructed, column-free and customizable full-floor residences.

There are a few ‘signature’ elements on the outside: The eastern facade will be aluminum and glass, with perforated oversized “porthole” shaped windows. At the top, a metal frame will shelter an arched observation deck for residents. On the north and south, three 15-foot wide floor-to-ceiling window walls will have uninhibited panoramic views of the city and beyond.

The modern tower aims to integrate the current 12-story limestone building at 260 Fifth Avenue with a new tower rising on the adjacent 262 Fifth Avenue site. 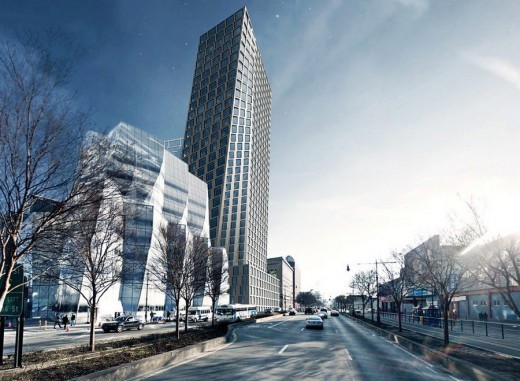