The agreement sets out the terms of the future development of the Eden Project in Qingdao, including design, construction and operation of the attraction. The signing ceremony took place at the British Ambassador’s Residence in Beijing.

Eden Qingdao will be themed around water and will feature the world’s largest indoor waterfall, which is set to be more than 50m high – roughly the same height as Niagara Falls on the border between the USA and Canada.

David Harland has been travelling with the Prime Minister, Secretary of State for International Trade Liam Fox and other UK business leaders as part of the three-day trade delegation to China to promote the Mrs May’s vision for a “global Britain”.

David Harland said: “This is a huge development in the history of the Eden Project and the biggest step we have yet taken towards opening an Eden Project in China.

“We are very excited about the possibilities for this attraction and the city of Qingdao and are very pleased to be working with our friends and colleagues at China Jinmao Holdings Limited.”

The agreement follows the creation in July last year (2017) of Eden Project International Limited (EPIL), a company formed to drive the establishment of Eden Projects around the world. Eden Project Co-founder Sir Tim Smit is executive chairman of EPIL.

EPIL is a new entity formed as part of the Eden Trust to partner with like-minded organisations to deliver the Eden mission and to deliver social and ecological benefits during a time of global environmental decline and social disruption.

The new projects will focus on the big global challenges as defined by their specific localities – such as soil, water, food and biodiversity – and will work in collaboration with a wide variety of organisations, companies, communities, research and conservation groups.

Eden Project International is currently working on four projects in China and others in Australia and New Zealand. Other overseas projects, including some in the Middle East and North America, are due to be announced in the coming months.

Eden is working on the China, Australia and New Zealand projects with Grimshaw Architects, who designed the world-famous Rainforest and Mediterranean Biomes at the Eden Project.

Among Eden’s proposed projects in China is one in the historic city of Yan’an, famed for being the end of Chairman Mao’s Long March and north of the Xian, home of the terracotta warriors.

This project will explore the theme of land and soil and its importance for life on earth. The project will showcase ecological restoration as a vital tool for the future and restore a degraded site just outside the city into a fertile valley full of flowers, agriculture, craft and education.

Eden has announced that it will undertake pre-planning and early feasibility consultancy work for a project in Jizhou (near the city of Tianjin) in a former limestone mine with the ultimate aim of regenerating the landscape and surrounding area.

Eden is also working on a project based at Sheng Lu Vineyard in Beijing. The aim is to create a place to reconnect with nature. Education and training programmes will run from here, offering the chance for children and adults to play in natural environment. Eden has been asked to provide support in turning the vineyard into a profitable and educational visitor attraction as well as supporting education and offering horticultural and landscaping advice.

The Eden Project is due to welcome its 20 millionth visitor during 2018 and, since opening in March 2001, has generated £1.7bn for the regional economy.

First of the Eden Project Visitor Centres in China

Design is helping to create the first of the Eden Project’s visitor centres in China.

The Eden Project is embarking on developing visitor centres in the US, China and Tasmania. The UK education and environmental charity is planning three for China. Grimshaw Architects and the creative consultancy LDA Design have been appointed to create the first of these – a new ecological park near the port city of Qingdao on China’s east coast.

Water sets the framework for Qingdao, and LDA Design and their ecology team will help to create wetlands, freshwater and salt lakes, swales, reed beds, rain gardens and beaches. One of the Eden Project’s key messages is that the world is ours to make better. The ecological park will harness Eden’s capacity, proved in Cornwall, to surprise and delight, at the same time as providing an understanding of water purification and how we can go about water protection and conservation.

The new park, which is being developed by Jinmao Holdings Limited, is situated on reclaimed land where two rivers meet. The site will draw on China’s 4,000-year-old relationship with the environment as well as the Eden Project’s ecological principles.

“We are thrilled to be part of the design team developing China’s first Eden Project, enabling people to explore and understand what water means for life on earth,” said LDA Design’s Neil Mattinson, Senior Board Director. “This is a truly amazing part of the world and our aim is to create an unforgettable, rich experience where lasting memories are made at the water’s edge. We hope it will be a place where people return time and again.”

Since opening in 2001, over 19 million people have visited the Eden Project in Cornwall to discover more about plant life. Built on a former clay pit, the centre – which has become one of the UK’s top visitor attractions – features the world’s largest ‘rainforest in captivity’. It is estimated to have boosted the local economy by £1.7 billion.

The Eden Project announced today (July 24, 2017) that it is launching a new company to drive the establishment of Edens around the world.

Eden Project International Ltd (EPIL) is a new entity formed as part of the Eden Trust to partner with like-minded organisations to deliver the Eden mission and to deliver social and ecological benefits during a time of global environmental decline and social disruption. The new projects will focus on the big global challenges as defined by their specific localities (e.g. soil, water, food, biodiversity) and will work in collaboration with a wide variety of organisations, companies, communities, research and conservation groups.

At the helm of the new company are Co-Founder of the Eden Project Sir Tim Smit, who has been appointed Executive Chairman of EPIL, and Eden Project Executive Director David Harland, who has taken up the role of Chief Executive of the international company.

The ambition of the new wing of the Eden Project is to advance the Eden mission by establishing collaborative Eden projects with international partners across the globe. It will also undertake consultancy services for new and existing projects in a range of areas.

Sir Tim said today: “Eden’s mission is to explore our dependence on the natural world, to use that understanding to excite people into delivering transformation where they live and to ask really serious questions about what a great future might look like for all of us.

“We want the new Edens to act as a heartbeat for those who feel the same way as we do and to develop in all of them the ability to tell the stories that inspire the people who are their constituency.”

Sir Tim added: “We need to green the desert of our mind, we need to fertilise our imagination and we need to believe that the future remains ours to make.”

The launch of the new company comes after four successive years of consistently healthy trading by the Eden Project, which first opened in a disused china clay quarry near St Austell in Cornwall in 2001.

Its latest accounts, for 2016/17, showed a cash surplus from trading of more than £1.6 million. Turnover and visitor numbers have also increased significantly.

During 2016, four per cent more people than the previous year visited Eden and numbers in December were the best ever for that month. For the first time since 2011, Eden welcomed more than one million visitors in a 12-month period.

In its first 16 years, Eden has attracted more than 19 million visitors and generated £1.7 billion for the regional economy.

The new international team will also be responsible for delivering a number of projects in the UK.

Chief Executive of Eden Project International David Harland said: “This is an incredibly exciting moment for the Eden Project as we seek to work with new audiences across the globe with our vision for a global network of Eden Projects. New professional jobs will be created both in Cornwall and abroad with Eden in Cornwall acting as our research and development hub for new ideas and innovations.” Eden Project International is currently working on three projects in China and others in Australia and New Zealand. Other overseas projects, including some in the Middle East and North America, are due to be announced in the coming months.

Grimshaw Partner Jolyon Brewis said: “We are delighted to support Eden Project International Ltd on a number of ventures around the world. Grimshaw’s relationship with Eden Project spans over 20 years and we are proud to help bring Eden’s ethos to new audiences through unique architecture, landscapes and immersive content; all delivered with characteristic joy.” Eden Qingdao will explore the theme of water and its importance for life on earth.

The project is still on the drawing board, with construction due to begin later this year.

As with similar projects it will link with other Eden Project centres around the world, sharing content and programmes. This will be an Eden Project for China but with a global relevancy.

The second major project in China is in the historic city of Yan’an, famed for being the end of Chairman Mao’s Long March and north of the Xian, home of the terracotta warriors.

A feasibility report is complete and Eden Project International is now ready to present its plans.

The third Eden project in China is based at Sheng Lu Vineyard in Beijing. The aim is to create a place to reconnect with nature. Education and training programmes will run from here, offering the chance for children and adults to play in natural environment. Macquarie Point Development Corporation (MPDC) of Hobart, Tasmania, Australia, approached Eden as the corporation is looking to regenerate an environmentally-damaged piece of land (15 hectares) around the port area. MPDC contacted Eden as they were seeking a flagship/anchor for the mixed-use development.

Hobart itself is a rapidly developing city with an alternative side which has been brought to the fore by the Museum of Old & New Art (MONA).

This project fits with Eden’s ethos as it will transform a polluted, discarded site, as well as ensuring the Eden message can reach a new audience. 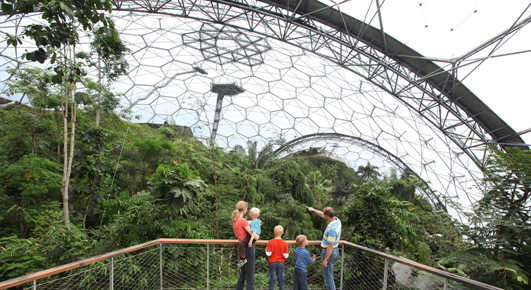 photo from The Eden Project

In Christchurch, Eden is working with a local trust to develop plans for a social enterprise and attraction in an area of the earthquake-damaged Red Zone. Here Eden will explore stories of nature and culture and will include restoration of native ecology along the iconic River Avon shoreline. There will be benefits for the community and tourism with the aim of boosting visitors to the city again.

The project is currently in the early stages of concept development.